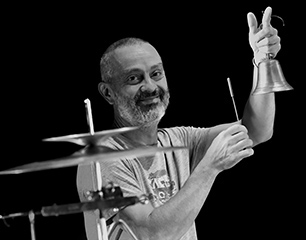 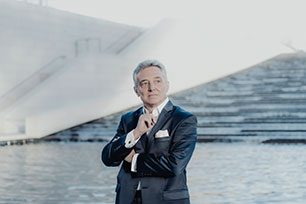 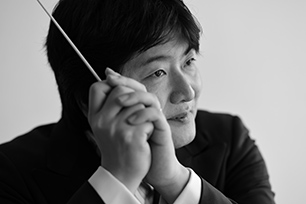 Steve Reich’s Clapping Music opens this 2023 festival and invites us to explore every possible musical path. The following programme compares César Franck and Anton Bruckner, two master organists of sacred music who have ventured along other paths, from the small form of the fantasy poem to the monumental symphonic art.

More information
Shuttleservicebooking
During the festival, free shuttles are available. More information on the link below.
Book a shuttle
Sacred echoes and new ways

It would be tempting to view César Franck above all as a genius organ player. In 1859, he was the first principal organist playing the great Cavaillé-Coll at Basilica Sainte-Clotilde and, as of 1872, appointed professor in charge of the organ class at the Paris Music Conservatory. However, the discreet “Father Franck”, as his students affectionately called him, did not just leave a legacy of sacred music. A skilled pianist and great admirer of his German predecessors, who had made this profane instrument a protagonist of works of fantasy (Konzertstück by Carl Maria von Weber, 1821); Totentanz by Franz Liszt, 1849), the composer from Liege followed in their steps in 1884 by writing a short piece for piano and orchestra from a poem by Victor Hugo, Les Djinns. In this very musical text, lines go crescendo and descrescendo, counting more and more syllables until they recede again into silence, like the demons appearing and vanishing in the night. Franck initially follows the same path, from a simple harmonic line that he gradually makes richer, longer and more complex. Then, the composer picks up on another characteristic of the poem – the contrast between the furious djinns and the imploring narrator caught in the storm. Faced with the hellish orchestra, the piano then becomes the poet’s voice, “imploring, but with a worried and slightly agitated tone”, as Franck indicates. It results in a singular musical form which in fine celebrates the Christian morality dear to the composer which sees faith triumph over demons.

Pleased with the creation of Les Djinns in March 1885 and in order to thank the pianist Louis Diemer who first performed it, Franck creates a series of Variations symphoniques for piano and orchestra over the following summer. He thus takes hold of a form which yielded famous works, from Bach’s Goldberg Variations to Schumann’s Etudes en forme de variations to Beethoven’s Variations Diabelli. The beginning of the work is actually reminiscent of Beethoven and the slow movement of his Piano Concerto N°4 in its direct opposition between a forceful orchestral motif and a plaintive piano line. From this double seed, Franck very gradually develops a discourse which naturally leads to the actual theme presented by the piano in choral form. Although such an opening may have destablised 19th century listeners, it is the trademark of Franck’s style, his practice of improvisation on the organ being very perceptible in this very singular composition.

An exact contemporary of César Franck, Anton Bruckner also seemed destined to spend his life in sacred music. The son of the organist in a little village of Upper Austria, the young boy entered the choir of the neighbouring Sankt-Florian Abbey before he became its chief organist and was appointed in 1856 to the sought-after tribune of Linz Cathedral. A career of virtuoso musician and composer of sacred music opening before him, his passion for the orchestral repertoire keeps him from renouncing his “vocation of symphonist”, as he later called it. After composing three initial symphonies with uneven results – he discarded two of them from his catalogue – his Symphony N°2, created in Vienna for the closing ceremony of the 1873 World Expo, has become a touchstone in his orchestral corpus.

In this symphony, Bruckner introduces devices that would characterise his entire symphonic style. Struck by Wagner’s mystical and grandiose orchestra since his discovery of Tannhaüser, he stretches the proportions of the four movements, builds large development sections, draws long and slow crescendos. To support this impressive architecture, Bruckner makes use of his organist’s contrapuntal science: he multiplies instrumental layers and textures and draws lines with insistent rhythms. In this Symphony N°2  can be even heard other echoes of the composer’s sacred music, such as a quote from the “Kyrie” from his Mass N°3 in F minor slipping into its finale. Despite receiving public and critical acclaim on its first performance, Bruckner touched up his score for the second production a few years later, reducing its form, making cuts (in the finale), highlighting a tempo – by turning the Adagio of the slow movement into an Andante – and taking out a few of the resounding silences that had earned the work the nickname of “Symphony of pauses”. It is this new version of 1877 which is programmed tonight.

As a prelude to this opening concert, unusual applause will resound in the Rainier II Auditorium as Steve Reich’s Clapping Music announces the many American works presented this year. In this brief duo conceived in 1972, Reich playfully experiments with a jarring technique on the most basic of instrumental materials – a musician’s claps, which become ever more out of sync with his partner’s until the tandem eventually synchronize them again. But this piece can also be heard as a musical inventory listing the twelve ways of combining a same rhythmic pattern of twelve eighth notes into a duo. Beyond the composer’s wink, Clapping Music is an invitation to explore all the possible musical paths. Isn’t it ideal to open a festival?

See the entire program
Next concert