Thursday 09 March ı 8:00 PM
Musée Océanographique
Before
6:30 PM - Lecture - Musée océanographique
The 'Before' and 'After' sessions are reserved for concert ticket holders only

“The late style of Franz Schubert” by Nicolas Dufetel, musicologist 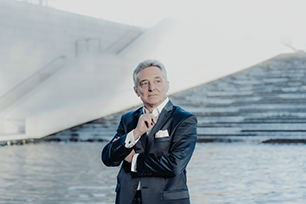 In this recital devoted entirely to Franz Schubert, Michel Dalberto explores the composer’s pianistic art in all its diversity, from his first opuses to his last sonata, from his lilting motifs, inspired from the lieder, to the frenzy of Viennese dances.

More information
Shuttleservicebooking
During the festival, free shuttles are available. More information on the link below.
Book a shuttle
Between miniature and frescoe

The image we readily like to associate with Schubertian creation is that of a gushing spring, so spontaneous his inventiveness seems to be as he produced no less than 23 piano sonatas – even 24 if you include the Wanderer-Fantasie. However, this impressive-looking number should not mask the fact that ten of them remain unfinished. It is the case of the first three, from 1815 and 1816, Schubert only overcoming his creative block in March 1817, when he finally completed the impetuous Piano sonata in A minor D.537. Indeed, the large-scale form in several movements was a challenge for this musician more at ease with the miniature – e.g. the format of Six moments musicaux D.780 composed between 1823 (N°3) and 1827-28 (four of them, including N°5), titled by Schubert’s publisher, Leidesdorf. The two pieces proposed by Michel Dalberto convey choreographic imagery – a Hungarian dance for Moment musical N°3 and a spirited galop for N°5. These particularly short pieces belong in the aesthetic trend of the fragment celebrated by Friedrich Schlegel: “Like a little work of art, a fragment must be totally detached from the surrounding world and closed upon itself like a hedgehog.”

At the time when Schubert composed his Sonata D.537, he already was the author of exceptional lieder, such as Gretchen am Spinnrade (1814) and Erlkönig (1815). As it is, some melodic contours, rhythmic patterns and instrumental phrases of his piano score recall the lied form – an essentially condensed and intense genre – rather than the sonata as conceived at the time. And it is no coincidence that the theme of its second movement should herald the melody of Im Frühling (March 1826), from a poem by Ernst Schulze, and reappear one last time in the finale of the Piano sonata in B major D. 959 (autumn 1828).

The vocal sap also nourishes the Wanderer-Fantasie D.760 (November 1822), known for its variations on the lied Der Wanderer (1816). The Adagio of the Fantasie uses the musical material in the second stanza of Georg Philipp Schmidt von Lübeck’s poem: “The sun seems so cold to me here, / The flower, wilted, life aged / And what they say, an empty echo/ I am a stranger everywhere.”  But rather than the words themselves, what makes the Wanderer-Fantasie so original is the unifying rhythmic unit typical of the Lied, which runs through the whole sonata. This rhythm is the dactyl (one long – two shorts), commonly used by Schubert, who often associates it to the step of the Wanderer – a “stroller” that German Romanticism turned into an errant figure. Although altered in the Presto to fit the piece’s triple metre, this pattern keeps its characteristic profile. As another assertion of unity and continuity still rare at the time, the work is played without any interruption. Finally, the spectacular virtuosity, unusual in Schubert, as well as the inner structure of the initial Allegro con fuoco, liberated from established norms, and the fugato of the finale, also assert a need to explore new directions.

The path to accomplishment

Throughout his life, Schubert would strive to conquer the large-scale form. His last three sonatas composed in September 1828, two months before his death, fulfil this particular quest. As if taking a walk through a colourful landscape of iridescent harmonies and endlessly renewed combinations of timbres, these sonatas steer clear from any conflict-building thematic development. Their way of bringing music time to life thus clearly breaks free from the Beethovenian model. The years of hard work that preceded them, with their numerous unfinished scores, testify to the difficulty of inventing a new type of material sustainable over long works. Once again, the vocal inspiration helped Schubert out of his predicament. His Piano sonata in B-flat Major D.960, devoid of the demonstrative virtuosity Romanticism sometimes indulged in, has the cantabile stand out from the very first bars.

Dark shadows sometimes creep into this music, which probes the intimate world of its creator. We think here of the trill which, in the initial Molto moderato, unexpectedly interrupts the singing – a strange, threatening whirr whose recurring variations then turn into the leading thread of the movement. And above all, we think of the Andante sostenuto, a painful and hypnotic lament, which is somewhat contained by the soft effusion of the central episode, until desolate introversion closes in again with a sense of crushing dereliction.

However, these dark moods are dispelled in the third movement by an intoxicating dance, a quintessential expression of the Viennese spirit. And the quicksilver drive of the Scherzo actually continues into the finale, driven by some tarentella-paced episodes. This frenetic rhythm typical of the later Schubert asserts the triumphant vitality of life while also sweeping you along a reckless flight forward, suspended over the abyss.