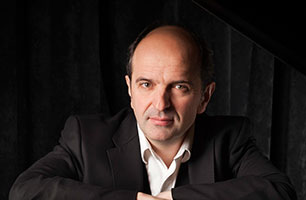 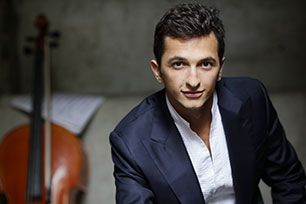 Denis and Aurélien Pascal, father and son, perform Gabriel Fauré’s works for cello and piano, from his brief “genre pieces” to the great sonatas of the end of his life. This is punctuated by three Nocturnes, emblematic of the composer’s artistic evolution.

More information
Shuttleservicebooking
During the festival, free shuttles are available. More information on the link below.
Book a shuttle
Theater without words

“The reception of my piece for cello has been excellent, which greatly encourages me to compose the whole Sonata”, Gabriel Fauré wrote to his publisher Hamelle in June 1880, three days after the private performance of his Élégie, for cello and piano. However, it took almost forty years, towards the twilight of the composer’s career, to see the birth of a sonata for this formation, and then a second one. In the interval, Fauré multiplied short “genre pieces”, leaving behind a corpus of compositions with a wide time and stylistic gap.

This Élégie, though, could have been placed within a larger piece of work. Its likeness to stately march and threefold structure with a recurrence of the initial theme in its last part are indeed traits found in many slow movements of sonatas. Wishing to have this successful piece expanded, Hamelle commissioned a piece from Fauré in 1884, this time light-hearted and lively. Fauré obliges and creates a whirling, virtuoso movement. The publisher opted for a suggestive title to better sell his score and was about to title it “Dragonflies” when Fauré, annoyed by the mercantile move, replied, “Butterfly of dung fly, put whatever you like!” It finally was Butterfly.

Tonights ‘s recital opens with two other short pieces which the composer did not intend initially for the cello-piano duo. The Sicilienne was supposed to be included in the music score for a staging of Le Bourgeois gentilhomme by Molière at the Odéon theatre in 1893. This explains the baroque-like writing of this melody which Fauré used again in 1898 as another stage music, this time for Maeterlinck’s Pelléas et Mélisande.  Although he casts the flute and the harp in the main parts to better merge his orchestra into the mediaeval setting of the play, Fauré also composes a chamber version of this same Sicilienne, this time for cello and piano.

As for the Romance, it dates back to the same period (1894) and was originally devised for the cello and pipe organ, probably for the tribune of the Madeleine Church where the composer was about to be appointed. All of Fauré’s vocality is expressed in this airy tune – the composer will actually use the same theme for his melody Soir. In between these few pieces of the early Fauré and the two twilight sonatas, a short Sérénade (1908) comes as a richly ornamented linchpin. Its remarkable Spanish-baroque whirling motifs come from its being dedicated to the famous Catalan cellist Pablo Casals, who contributed to the popularisation of Bach’s Suites.

It was only in 1917, thirty-seven years after thinking of it with the  Élégie, that Fauré seriously worked at conceiving a grand sonata for cello and piano. Far from the light character that prevailed in his earlier works, the composer immediately tackled the instrument in a tormented and angry, surprisingly terse first movement. Should it be understood as the echoes of the Great War? We are strongly invited to do so by Fauré who bases this work, as often with the cello, on a preexisting stage work. Indeed, the beginning of Sonate N° 1 distinctly takes up a dramatic passage from his opera Pénélope (1913), Ulysses preparing the killing of his wife’s suitors upon his return. After its melancholy song and ethereal piano, the second movement could bring more serenity, but Fauré sustains the tension in his discourse by ceaselessly modulating and never stopping the piano accompaniment. The finale, however, brings a happy conclusion to the work, the composer multiplying flights into the high notes as irresistible ascents towards the light.

Four years later, in March 1921, Fauré ventures one more and last time into the repertoire for cello and piano with Sonata N° 2, which is as sprightly, playful and inventive as the first one was dark. Its finale even looks like a bravura piece by the retired master, Fauré displaying all his expertise in counterpoint and harmony to create a rich and ebullient movement. “Ah, how lucky you are to stay so young at heart!” fellow composer Vincent d’Indy exclaimed after discovering the score. Only its central movement, resembling a funeral march in the spirit of the Élégie, imbues the work with noble wistfulness. Here again, Fauré drew from an earlier work – Chant funéraire, which he had just written for the centennial of Napoleon I’s death – to nourish the theatre without words of his duo.

From the clear songline of the Romance to the subtle counterpoint of the sonatas, the wide-ranging corpus for cello and piano is virtually unparalleled in Fauré’s catalogue, except for the thirteen Nocturnes for piano solo. Composed between 1875 and 1921, the latter range from the Chopin romanticism – still very present in Nocturne N° 1 – to the adventurous polyphony of Nocturne N° 13, which opens like a page by Bach before revelling in chromatisms. The cornerstone of this cycle, Nocturne N° 6 (1894), has dazzled many commentators with the starry skies of its central part. As the composer’s son Philippe Fauré-Fremiet used to say, to contemplate these Nocturnes is like listening to “the secret communion of man and the invisible things”.