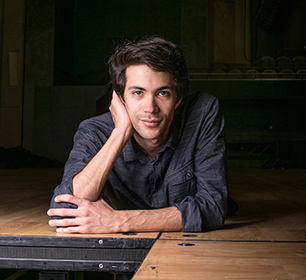 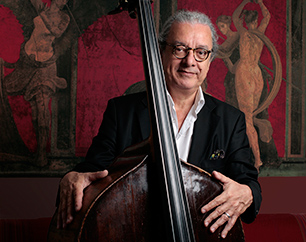 Chet Baker’s regular bassist for many years, Riccardo del Fra celebrates the legendary American trumpeter in an original tribute programme performed by his quintet and the Orchestre des Pays de Savoie (My Chet My Song). With Mystery Galaxy in the second part, he then opens a door to his own abundant inspirations.

More information
Shuttleservicebooking
During the festival, free shuttles are available. More information on the link below.
Book a shuttle
Symphonic songs and galactic dreams

The recent release on disc of unpublished radio recordings of Chet Baker (1929-1988) is a reminder, if one were needed, of the special place that bassist Riccardo Del Fra held next to the American trumpeter during the last years of his life. In this album Live in Paris, The Radio France Recordings 1983-1984 (Elemental Music), recorded in the cellar of a now defunct Parisian club, Le Petit Opportun, we hear the then 28-year-old bassist with Chet Baker in a trio whose third member was pianist Michel Graillier. In the absence of drums in this group, one can clearly measure the challenging double mission assigned to Riccardo Del Fra at the time. On the one hand, he had to keep the tempo like a strict architect of the passing time, and on the other provide his partners – both of them poets with tormented destinies – with the harmonic base from which they could give free rein to their sharp sense of improvisation. This demanding school of balance and listening, of confidence and dynamics, made Riccardo Del Fra’s experience with Chet Baker truly seminal. And the double bassist readily speaks of the many lessons – musical but also human and professional – that he learned from him, sometimes the hard way, sometimes in perfect communion with this tormented, poignant, fallen angel of cool jazz.

In 2011, having reached another stage in his career, Riccardo Del Fra was given the opportunity to pay tribute to this fellow musician who so deeply marked his artistic itinerary. At the invitation of the Jazz in Marciac festival,  accompanied by the late Roy Hargrove and an ensemble of strings and woodwinds, Riccardo del Fra thus performed some of the trumpeter’s favourite standards, which he arranged, while also presenting some of his own compositions inspired by his experience. Three years later, this project became a record, which took the deliberately subjective title of My Chet My Song, this time with Airelle Besson on the trumpet. In 2022, this repertoire morphed again thanks to the Toulon Opera, which offered Riccardo Del Fra to bring it to the scale of a symphony orchestra. This is the version presented as the opening of tonight’s programme.

Anxious not to slide into an exercise in style, Riccardo Del Fra was not satisfied with arranging the songs in Chet Baker’s repertoire in an overly literal manner. He considered this material as a link between his past and the musician he has become. He also took liberties with the original form of the songs, “creating introductions with drawers, inserting interludes, inventing new frameworks for improvisation, even linking a piece of the repertoire with a personal composition”, as he himself explains. If each performance is charged with the memory of Chet Baker and his love of melodies, it is also underpinned by Del Fra’s own conceptions of writing and orchestration, nourished by his familiarity with French music, his work for the cinema and his background as a neoclassical composer. At his side, present since the beginning, saxophonist Pierrick Pedron brings the breath of be-bop to the spirit of the project and roots it in the most lively jazz that Chet Baker had tried in his early days, with Charlie Parker.

The second part of the concert is devoted to Mystery Galaxy, a symphonic poem for quintet and orchestra recently composed by Riccardo Del Fra. Conceived as a suite, this piece  takes up the challenge of composing a score that closely articulates the development of forms and textures using all the properties of the symphony orchestra, even in its most contemporary expressions, while remaining open to the improvisational skills of jazz musicians and their ability to interact in the moment and generate musical sequences in real time that fit into the superstructure of the work. A practitioner of the most recent and experimental forms of improvisation, Rémi Fox replaces Pierrick Pedron in the quintet to play this piece whose enigmatic title refers to the composer’s inspirations. Mystery Galaxy aims to liken the fascinating power of cosmic structures and the infinitely large to the equally enigmatic power of our inner galaxies and the thriving life of the infinitely small which, deep in our synapses, generates the swarming of ideas, of feelings, and perhaps of the ever so elusive inspiration.