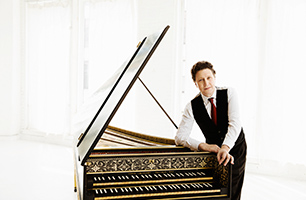 The famous American harpsichordist Jory Vinikour pays tribute to a founding father of the art of the keyboard, Johann Jakob Froberger, and to one of his distant “disciples”, Christophe Maudot, in a set of ancient and modern pieces that combine stylistic richness and exacerbated expressiveness.

More information
Shuttleservicebooking
During the festival, free shuttles are available. More information on the link below.
Book a shuttle
Modernity at the service of expressiveness
Froberger's synthesis

Trained at the court of Stuttgart, Johann Jakob Froberger was exposed to different European styles from an early age, thanks to the foreign musicians living at the court. He completed his training with a trip to Rome where he studied with Girolamo Frescobaldi. His work, almost entirely dedicated to the keyboard, shows these multiple influences synthesised into a unique style which strongly marked the following generations.

The Capriccios and Canzone bear witness to a training rooted in the contrapuntal tradition. The rigorous writing in four voices shows the composer’s great mastery of the stile antico. These pieces are structured in several parts, each presenting a variation on the original subject, either by diminutions or by a change of measure that gradually accelerates the discourse. Froberger places great importance on expressiveness, notably through the use of numerous dissonances or chromaticism, as in the subject of Capriccio VI.

Froberger’s modernity is particularly perceptible in his Toccatas, pieces in which free sections, a kind of notated improvisation, alternate with contrapuntal sections. The exuberance of the Italian school is present, and the years of training spent with Frescobaldi are particularly evident in the free parts. The performer is invited to play them with great rhythmic flexibility guided by the richness and expressiveness of the harmony and the inflections of the melody. Froberger shows his mastery of rhetoric, through the careful construction of his discourse and the use of figures such as the abruptio, the exclamatio or the congeries (accumulation of voices that evolve together to transform the harmony).

Rhetoric also occupies a central place in the tombeaus or lamentos that sometimes replace the allemandes at the beginning of Froberger’s dance suites. The Lamento sopra la dolorosa perdita della Real Maestà di Ferdinando IV, composed following the death of the very young king of Hungary, ends with a scale representing the ascent of the soul to heaven. The rhythmic freedom is sometimes specified by the mention “with discretion”, as in the allemande opening Suite No. 20, named “Meditation on my future death”, which is played slowly and with discretion.

The dance suites are irrigated by the French style. Their “style luthé” (lute style) of composition, which nourishes the harpsichord’s resonance by tampering with the harmonies, is directly inherited from the French lute school. Froberger was intimately acquainted with this repertoire, as evidenced by the Tombeau pour la mort de Monsieur Blancrocher, a tribute to his lutenist friend he met in Paris. This writing would become characteristic of the harpsichord language.

After having explored the possibilities opened by electroacoustic and mixed music and microtonality, Christophe Maudot continues his research by seizing typical elements of the harpsichord’s language to create Désordres passagers, a suite of short pieces each presenting a sound tableau.

L’Entrée is in the tradition of the prelude or toccata, which introduced the suites of pieces. The harpsichord sounds ample, thanks to broad, arpeggiated harmonies linked by lightly ornamented melodic lines. The haunting rhythmic regularity of the arpeggios breaks with the usual freedom of the preludes, creating a hypnotic cycle. Elements of rhetoric sometimes intrude, as in the Tombeau de J. C. Risset: the large arpeggios are transformed note by note into a long chromatic descent. This slow catabasis is one of the processes frequently used by composers to represent complaint and lamentation. The permanent variations in the flow of the arpeggios give an improvised dimension to this tomb, reminiscent of those of Froberger.

Christophe Maudot sometimes focuses on a specific idiomatic element and develops it to create the texture of a piece. In Oscillations, trills invade the entire range of the keyboard. The continuity of the ornaments throughout the piece evokes Ligeti’s Continuum, a landmark piece in the 20th-century harpsichord repertoire. Precisely notated, the speed of the trills varies constantly and the desynchronization between the two hands makes the sound matter constantly moving.

Thus, in each piece, a writing process is used and followed in a radical way to create a unique texture. A line of uninterrupted sixteenth notes flows over the entire keyboard in Côte Ouest; Tétracordes develops from melodic sequences of four sounds which are superimposed, inverted and gradually distorted. The rhythmic writing is always particularly careful: the desynchronization between the hands is frequent and the slight rhythmic variations suggest to the listener a form of freedom, a rhythmic ostinato sometimes runs through the whole piece, like the Tombeau de Robert Palmer which then takes on jazz accents. This wide range of sound textures is the result of the radical way in which Christophe Maudot works each of the elements he uses.