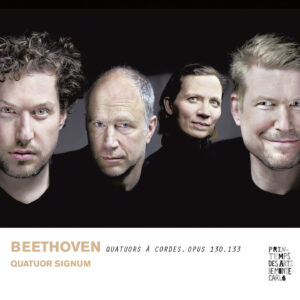 The Signum Quartet here interprets the vast String Quartet op. 130 in its original, 1826 version. Performed only once in Beethoven’s lifetime, the work was subsequently rearranged and lightened by the composer, at his publisher’s request. The full importance of this monumental score from Beethoven’s twilight years is best appreciated, however, in the original form. The original version’s six movements also show Beethoven’s desire to unite widely disparate elements into a whole, by juxtaposing a Cavatina inspired by operatic song, a Danza tedesca inspired by popular dance and a Great Fugue, inspired by the most learned tradition in musical composition. In this finale, the spirit of Bach hovers over the writing of Beethoven, who considered the Cantor of Leipzig the sovereign genius of learned music. His gigantic fugue seems to confront Bach, as though in a battle of Titans.