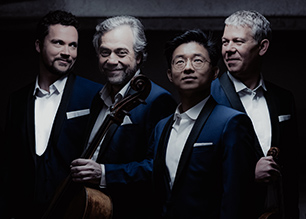 1h40 with intermission
Followed by a closing cocktail*

In two concerts, Quatuor Diotima journeys across a century of chamber music, from post-Romanticism to contemporary creation, from Béla Bartók’s String Quartet No. 1 to an unpublished work by Philippe Schoeller. The quartet ponders upon the horrors of World War II, which can be heard as much in Bartók and György Ligeti as in Different Trains by Steve Reich.

Watch the video portrait of the Diotima Quartet

* subject to the evolution of the sanitary situation

More information
Shuttleservicebooking
During the festival, free shuttles are available. More information on the link below.
Book a shuttle
The Quartet in the mirror of history

Generally perceived as the quintessence of chamber music, the string quartet genre has often been described as demanding, if not severe, and reserved only for “connoisseurs”. However, in my opinion, it also reflects a sensitive image of the times and societies that saw its birth, and can be listened to effortlessly. This is what each of the works in the programme of these two concert dates attests to. Composed over a span of more than a century, they sum up an evolution leading from post-Romanticism to the modernity inherent in the early 20th century (Béla Bartók’s quartets), underline the tensions linked to the World War II (Bartók’s Sixth Quartet, György Ligeti’s Métamorphoses nocturnes), evoke the memory of the Holocaust (Different Trains by Steve Reich) or echo our contemporary questions in the face of the challenges of time (String Quartet No. 2 by Ligeti, Extasis by Philippe Schoeller). As the movements unfold, everyone can grasp the astonishing vitality of a genre that has never ceased to renew itself, to rethink its format and architecture, offering new solutions to the question of “playing for four” and reflecting the composition challenges faced by their authors.

Completed in 1909, Bartók’s String Quartet No. 1 is a singular score, revealing the still-prevalent influence of Liszt, Wagner and Strauss, but also showing the musician’s recent interest in the works of Debussy. Its dense counterpoint, free and delicate moving lines, and already daring treatment of dissonance all recall the Budapest artistic milieu the work emerged from – a “Magyar modernity” developed by the literary review Nyugat (“West”), The Eight (painters) and the figure of poet Endre Ady. Modernity meant a search for innovative forms – here, a conception in three movements without interruption, unified by the same material and revealing a gradual acceleration of tempo. In a letter to his friend Zoltán Kodály, Bartók also describes the opus as “a return to life“, alluding to his breakup with the violinist Stefi Geyer.

The autobiographical elements are even more tangible in his String Quartet No.6, completed in 1939, when the composer was preparing to leave his native country. A fierce opponent of Nazism, mourning the death of his mother, Bartók offers a refined score that reflects the tensions of the time and the ripping apart of minds. Marked Mesto (“Sad”), the slow introduction returns at the beginning of each movement, growing in length and intensity until it becomes an independent section in the Finale. The carefully crafted overall plan features an energetic Vivace that precedes two satirical movements in ternary form : an acidic March, a grotesque, savage Burletta (Burlesque), and a depressive Finale. This arrangement, borrowed from Mahler’s Symphony No. 9 or Berg’s Lyric Suite, reveals a “psychological” trajectory that ends in a slow, dark movement, as if on the brink of the abyss. The Finale recapitulates the themes of the previous movements and describes them as broken by time and pain, “stripped of their vitality and energy”, as Stephane Walsh aptly notes.

Ligeti’s String Quartet No. 1 reveals in turn the ambiguities of Hungary at the time of World War II. Hörty’s government, which had grown close to Hitler, was replaced after the liberation by an authoritarian regime subordinated to Stalinist Russia. Bold works were censored, including Bartók’s quartets, which were banned from the radio. Caught in this backlash of history, Ligeti did not complete his Métamorphoses nocturnes until 1958, two years after his flight to the West. His score consists of only one movement, organised in short sections contrasting in character. The beginning offers a singular mise en abyme: the chromatic progressions and canonic fabric reach a climax and then subside, just like the overall form which is divided by a strong central caesura. The whole quartet is based on a matrix idea of four notes presented in canon, either by permutation or reversal, and creating an unusual sound nebula. It builds into a vast phantasmagoria alternating desolate melodies, capricious scherzo, dreamy tracks, echoes of Viennese waltzes, animated popular dance and fragments of recitatives before the brief final extinction.

Ten years later (1968), Ligeti wrote a Quartet No. 2 displaying an even more complex construction. The five movements that make this quartet do not develop themes or motifs, but rather explore different types of behaviour and narrative organisation, offering the listener a surprising “study of textures”. The frameworks are constantly renewed, avoiding any systematism, in keeping with a decade marked by the desire to transgress social and cultural conventions considered obsolete. The first movement, Allegro nervoso, is based on an eventful fabric built on calls, frenetic impulses, frail lines opposed to sudden, fleeting explosions, and a blossoming of small intervals revealing snatches of melody. Static in nature, the second movement is based on a canonic writing technique that creates the impression of a sound mass animated from within, reminiscent in a synesthetic perspective of light beams entering a dark room. Entitled “Like a precision mechanism”, the third part shows the composer’s fascination for complex polyrhythms, deranged mechanisms and absurd imaginings that expose the fragilities of the world. The fourth part is a brutal and furious Presto that contrasts with the writing in “clouds of sounds” of a Finale that ends in silence and dispersion.

Steve Reich’s Different Trains (1988) questions indifference and memory. The work alludes to the trains that ran in the 1940s, transporting either ordinary travellers or deportees to extermination camps – those “different” trains journeying without return… The work is based on voice recordings linking phrases by former sleeper car attendants with testimonies of Holocaust survivors and the memories of the composer’s own housekeeper. The string instruments imitate the melodies of speech while the train noises are transferred to tape. Repetition, voice shifts and looping merge with bits of conversation, renewing the very technique of the string quartet and suggesting a still present trauma. The composition aim at both documentary-like reality and a new kind of “staging” using contemporary technologies. Philippe Schoeller’s Extasis should meet these same challenges, unsurprisingly on the part of a composer influenced by natural models such as the flow of wind or tides, as well as  guided by introspective exploration, with a taste for writing about fragility and the immaterial — other questions with powerful current resonances.