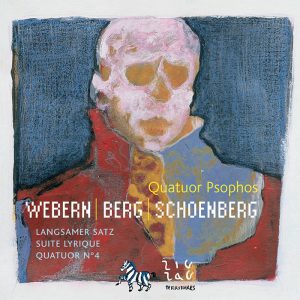 Psophos – Vienna School
The Strad – August 2007 Whereas Schoenberg’s Fourth Quartet (1936) is a late flowering of the composer’s strict twelve-note period, the other two works presented here are both to some extent Romantic love letters: Webern’s Langsamer Satz, written in a serene, autumnal vein, was inspired by his adored cousin and future wife Wilhemine Mortl, and Berg in his Lyric Suite reflects on his passion for Hanna Fuchs-Robettin, a key inspiration for his opera Lulu. The Berg suite forms the heart of this attractive compilation, offering a supple vehicle for some razor-fine rapport and a kaleidoscope of varied timbres and textures shared between these four piquant and incisive, youthful players. Berg’s six movements chart a progress from joyous optimism (Allegro gioviale) to downcast pessimism (Largo desolato), and the players of the Psophos Quartet seem to have an instinctive grasp of these uneasy, hypersensitive moods. True, the Andante amoroso could luxuriate more – it’s rather too earnest here. But the jocund opening is just what it says, regardless of any serial underlay. The first scherzo (Allegro misterioso), suspense filled and other-worldly, yields a rather wild, gossipy four-way debate. Thereafter the Psophos unleashes the zealously impassioned, the downright delirious and the abjectly desolate with equally assured precision. The Psophos assimilates Schoenberg’s serial late quartet with equal confidence, not least in two beautifully clean outer movements, which confirm Schoenberg as both Classical and Romantic, deep-rooted in German tradition, not some kind of musical freak. Many will also relish the player’s charming reading of the fin de siecle Webern piece: it is sensitively played, albeit skirting the sensual, and, like the other works, gorgeously recorded.