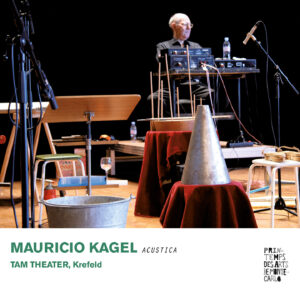 Acustica (1968-1970) is an adventure in sounds. One of Mauricio Kagel’s major compositions, it is written for “experimental sound-producers and diverse objects” – an array of instruments from every possible and imaginable place and time. The actions involved in creating this clamor being very free, every performance is different. This CD contains two versions (a public performance and one without audience), recorded in the context of the 2007 Festival du Printemps des Arts de Monte-Carlo, under the composer’s direction. Since Kagel died a few months later, aged 77, this is his last recording.