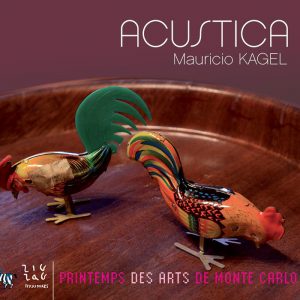 From The Sunday Times July 20, 2008 Mauricio Kagel: Acustica – The Sunday Times review TAM Theatre, Krefeld Stephen Pettitt Maurizio Kagel’s Acustica (1968-70) is one of those experimental and, on the face of it, absurdist scores. It was conceived for tape (operated here by the composer) and five players (of the TAM Theatre, Krefeld), who extract noises from a bewildering range of made, modified or even conventional instruments, as well as their own voices. Included are a set of pitched castanets; bicycle bells arranged on a stick in order of pitch; comb and paper; and a cylinder of compressed air attached to various tubes and pipes. Although each performer is responsible for choosing the placing of each action, Kagel’s instructions are precise. The effect is intended to be as much visually as aurally theatrical. Even in sound-only format, however, this eclectic cacophony remains an exhilarating, glorious celebration of the act of making sound