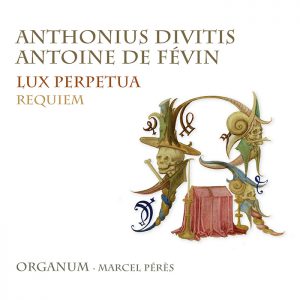 This Requiem is known in five sources; two of them mention no composer, two attribute it to Antoine de Févin, one, the Occo Codex, to Antoine Divitis. It is recorded here in the version transmitted by an early sixteenth-century manuscript, the Occo Codex, a sumptuous, richly illuminated volume. The book was originally intended for use in worship at one of the oldest churches in Amsterdam, built in the fourteenth century on the site of a miracle which played a fundamental role in constituting the religious identity of Amsterdam. Occo was the name of the rich merchant who financed the production of the manuscript. It contains some fifteen masses by great composers of the fifteenth century.